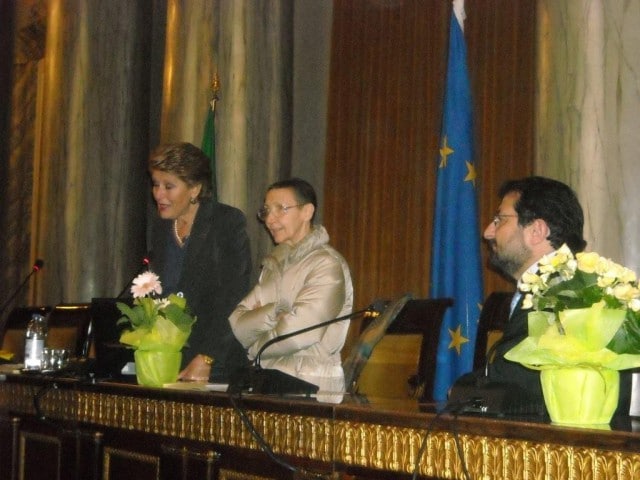 In the wonderful Major Hall of the “Camera di Commercio” of Trieste a crowded Press Conference took place. The many events that has been organized in order to celebrate the success of the International Poetry Competition Castello di Duino VI Edition has been presented and the wohle project “Poesia e Solidarietà Linguaggio dei Popoli” (Poetry and Solidarity Language of the Peoples) has been illustrated by stressing already obtained results and possible developments.

Among them groups of young coming from Beirut, Theran, Hungary, Slovenia and poets from Pakistan, Russia, Poland, Romania, Croatia and many, many young people from Italian cities.

Major Asse, from Camerun, winner of the first prize in the competition 2009-2010 was unfortunately not yet arrived!

Daad Kassem, teacher coming from Lebanon, with moved words, has expressed the appreciation of the Italian Cultura Institute in Beiruth and the wish to establish permanent relationships between the students of Lebanon and of Trieste.

Gabriella Valera Gruber has announced the aim to crate an observatory about the yout- culture in different countries and areas of the world and has expressed her thanks to all public and private institutions which make the project possible, as well as to all people who collaborate generously and passionately.