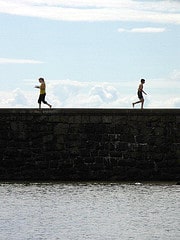 Photo exhibition by the Poets of the International Poetry Competition Castello di Duino VII edition (2011) with their own poetic comments.

Why do we give such a large space to the sky? Why don’t we look at the Earth, as a mother, that outlines the horizon of a possible future with her gift of fruits? Silly card-horizons diggers, we don’t realize that every glimpse contains different horizons with all their latitudes. Stories of Earth, Sea and “Goodbyes” are suggested by these photos, which imagine the horizon rather than representing it; but also stories of crossings, untraceable limits and definitions, of meetings and expectations, hidden in children dreams and in their young thoughts, open to new narrations.

To fully enjoy the exhibition hereby presented, some of its particular features require an explanation. Each photo is associated to a poetic comment made of verses written by the authors themselves. Nevertheless the poems have not been written to comment the photos; photos and poems have been created autonomously; instead the authors have chosen to propose that photo after having sent a particular poem, in order to create a synthesis of meanings. At this very synthesis the curators have tried to point out. The photo sequence therefore reconstructs a sort of grand story: a story of openings and silences, horizons closing up under the scepter of man and hopes, questions and search, timidities and rushes towards the sky. Finally, a story of destiny and dream.

To enjoy the exhibition one has to linger over the verses which are an integral part of its meanings: the exhibition is a story written by young people coming from all over the world, without knowing each other, written by the curators who reread these photos and these verses and imagined these young people in dialogue and confrontation, rewritten by all of those who will visit it and will be thinking about it again.

INVITATION TO THE 2020 PHOTO EXHIBITION

I have a dream