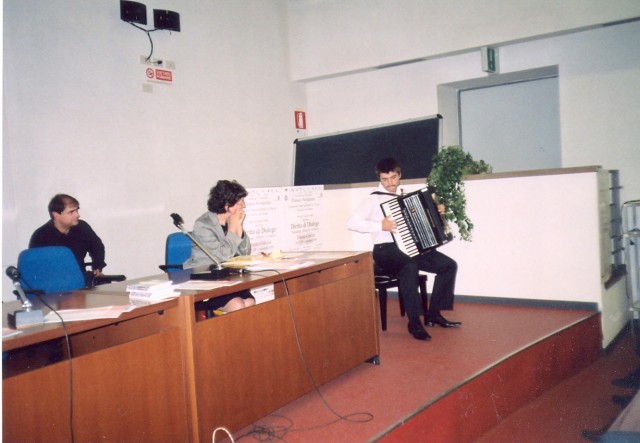 We want to start to tell the events which took place in Trieste and Gorizia from September 26- to September 28 2008 by quoting the words of a young poet who is member of our “internationl network of Poetry and Solidarity”, but couldn’t come to Trieste because the visa was denied him.

I am writing to bring to your attention the new war that is shattering again the lives of populations in my region, the North Kivu Province (Eastern Democratic Republic of Congo). With this month October, clashes have restarted after a peace process launched in have failed to bring an agreement between the Congolese government and several rebels groups, including a Rwanda-backed movement and a dozen of so-called patriotic and nationalists militias. In less than three weeks, this relapse into armed violence have made thousands displaced persons from Masisi and Rutshuru territories (North Kivu) and mass killings, rapes of young girls and women, torture and cases of disappearances in hot zones[…]

In this side of the Congo, secular ethnic conflicts have turned into a high complicated political crisis where meet cross-border problems (refugees, armed groups,…), secessionism and genocide acts targeting minority groups. Since 1993, the quest for peace has been unsuccessful as violence has invested all the spheres of the society[….]?I am calling to your solidarity … If we can not stop the dark political game that is taking place, at least we will be delighted for having raise awareness. Please, help break the silence!

September 26: in the “Aula Magna” of the “Higher School for Interpreters and Translators”  (University of Trieste)

Mrs. Prof. Cristina Benussi, wellknown literary Critic and Dean of the Faculty of Literature and Philosophy of the University of Trieste, introducts to the public the book “Voices/Silence” with the poems of the winners of the competition (ed. by Gabriella Valera Gruber, Ibiskos Editrice Risolo, Empoli).

Antonietta Risolo, president of the Publishing House IBISKOS EDITRICE RISOLO, sponsoring the competition, personally gives a copy of the book to the many poets attending the conference.

Thanks to the sponsoring of Antonietta Risolo tha sales of the book has been given to theFondazione Luchetta Ota D’Angelo Hrovatin for children war victims.

Public and Authorities in the Aula

Guest of honour the writer Boris Pahor who smiling accepted to be considered a participant of the World “Youth” Forum. He spoke about “Dialogue denied” in the extermination camps that he personally experienced.

Participants in the forum: